Today was our first seminar with Richard, the lesson was started by looking through our Love/hate posts that had been previously set. It was a good to see that everyone agreed on the bad designs, some of them, so bad they were humorous to look at.

After we various love/hate posts had been displayed and discussed Richard moved on to present us with the new Leeds College of Art Prospectus. We were told that we would be criticising the prospectus and generating some feedback about whether it was successfully designed or not. This year, it was designed by an outside graphics firm (usually designed by Leeds College of Art students) so it was interesting to see the differences to the prospectus that I received last year.

We were split into groups to look through the book then wrote our feedback down individually.

Firstly, upon receiving the prospectus the font cover immediately set a bad standard.  The front cover is one of the most important aspects of a prospectus, as it’s what the audience see first when looking at the book. Furthermore, it sets the design standard for the rest of the book. In this case, the cover has been designed really badly; the type placement was unbalanced and almost didn’t seem centred. Moreover, a cheap card stock has been selected to print on, this has been combined this with expensive ink that really hadn’t taken to the card well, leaving the typography looking blotchy and unprofessional. Additionally, the designers have selected colours that really clash, the card is bright blue, contrasting the prominent red title. It could be argued that the cover is eye catching but, overall, it set a really bad standard for the rest of the book. 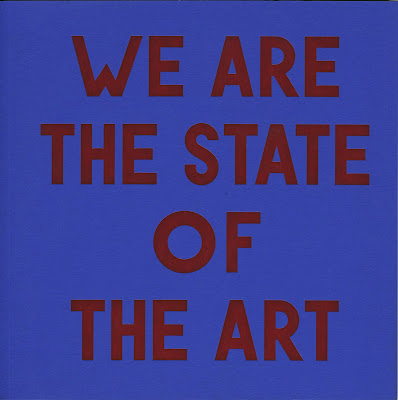 Upon opening the prospectus the audience are greeted a mix of quotes about the college. These are presented very simply on a plain white page. Some of the quotes include words and phrases such as “creation of next-level work”. A page describing the abundant creative atmosphere should be more exciting and experimental. This is the second page viewers see when looking through the prospectus, and as the reader you are greeted by the most formal looking mix of layout and type imaginable. The prospectus is aimed at young creative students so it’s hard to understand why the prospectus has such a formal content. Any professional graphic designer should design the content of the publication around the intended audience. 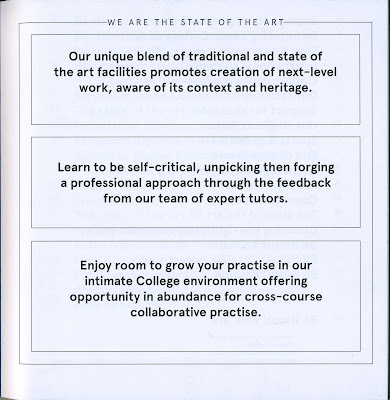 The formal content continues with little experimentation with layout or colour. First the reader is greeted by an unwelcoming contents page, which mixes a plain white background with a simple layout and basic type. This bland mix of a formal layout and lack of colour is really not what you would expect to see compared to the prospectus students received last year. On the other hand, the way that the contents page is composed mixed with the simple typeface makes it easy to understand. The theme runs consistently throughout the book, but does not cater for the right audience. 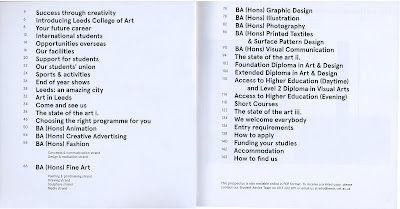 Despite the irrelevance of some images, there is often a good balance between bulky blocks of text and image. Often, a page containing images mirrors a page with lots of text. This helps when keeping the audience interested and engaged, as large amounts of text are off putting and sometimes ignored. Keeping a good balance between type and image is vital when creating a prospectus, but it seems to have been done well here. 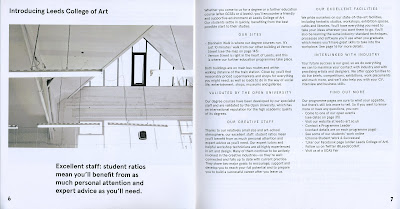 Half way through the book it was noted that towards the end the prospectus the paper stock changed, from being glossy to an almost matte kind of paper. This is really unprofessional, the stock should be the same throughout the book, to avoid looking disjointed and cheaply made.

In conclusion, the prospectus has some good points, such as the balance between text and image. However, the prospectus would be more suited recruiting for a formal office job, not creative art students and designers. Finally, the book fails to achieve the main purpose it has, which is to inspire young students, and give them an insight into how amazing the college is.
Posted by Jordan Harrison-Reader at 07:46

Email ThisBlogThis!Share to TwitterShare to FacebookShare to Pinterest
Labels: OUGD401