As part of my primary research for the dissertation I wanted to conduct some in-depth participant interviews to establish how participants of Boom Festival were affected by the varying aspects of the event.
As my dissertation has a predominant focus on sustainability and the festival philosophies intrinsic to transformational events, the interview questions will be predominantly focused on discovering the whether the interviewees noticed and/or were affected by such festival elements.

Relevant information gathered from the interview will be used to support the opinions presented in the final chapter of the investigation.

The first person I contacted regarding partaking in an interview is one of my old friends Joseph Peplow. He was one of the individuals I arranged to meet at Boom festival after he spent the weeks leading up to the event travelling through Europe in a lift share convoy from Amsterdam.

For many reasons Joe is a perfect person to interview on the subject as, although like me it was his first time at a transformational event, he had an established knowledge of the counter-cultural movements taking place within the festival environment and the importance of the philosophies disseminated amongst participants.

A few months after the event I was able to contact him through Facebook and ask whether he would be interested in helping me with my research. Contacting him was always hard as after the festival he went travelling through Portugal into Spain and down to Morocco. Therefore, when I wanted to speak to him I had to wait until the rare times he found wi-fi in the Morrocan countryside. However, despite such hardships, Joe was willing and able to help me out with my research, something I am greatly appreciative of.

The messages below document the process of organising the interview. 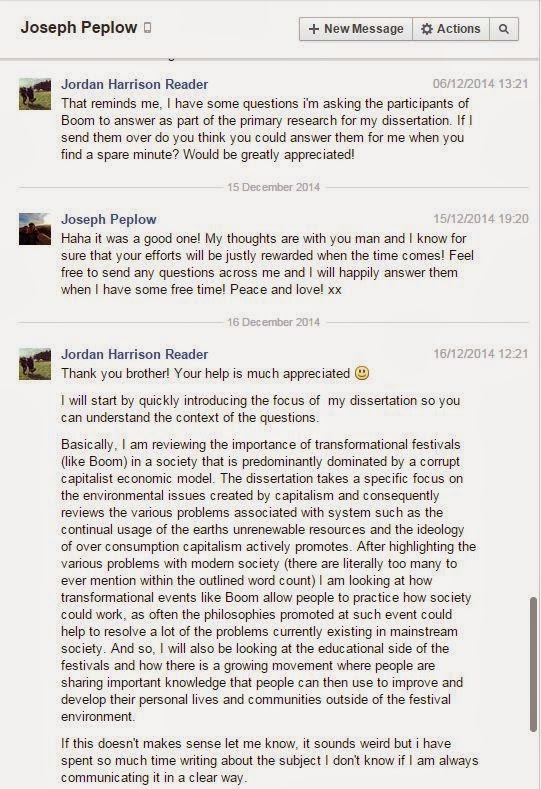 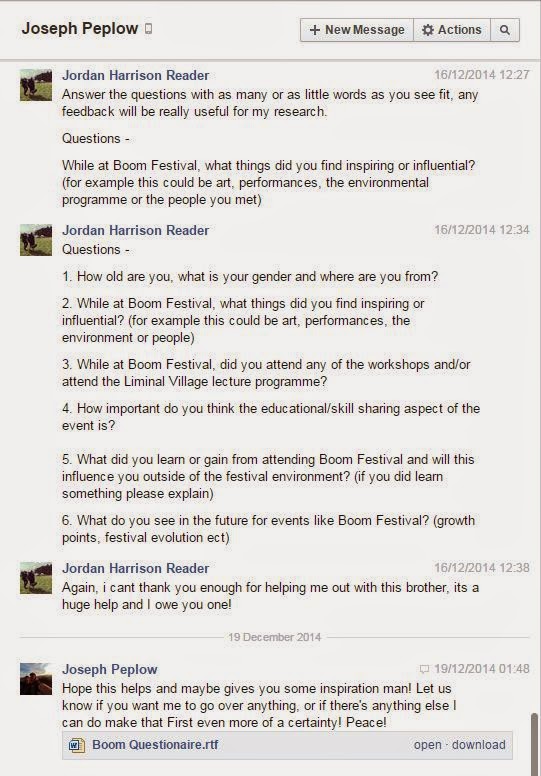 The responses received from the interview are listed below;

1. How old are you, what is your gender and where are you from?
I am 21 years old, Male and am of the Earth. The line makers call the land of my birthplace the "United Kingdom".

2. While at Boom Festival, what things did you find inspiring or influential? (for example this could be art, performances, the environment or people)
The whole concept of the festival for me is massively inspiring. The harmonious blend of the influential and often undervalued cultures such as music, art, and spirituality, moulded in such a glorious and tranquil environment, founded on sustainable philosophies and altruistic ideologies, all unfolding in such a caring and loving manor, was a wonder to be immersed in! Very much different to some of the more commercial festivals I have been to. A joy to behold sustainability being promoted over profitability, conscience over consumption.

3. While at Boom Festival, did you attend any of the workshops and/or attend the Liminal Village lecture programme?
Aside from the holistic pleasures being offered at Boom my main indulgences were the diverse variety of lectures being delivered in the liminal village. They caught my attention due to the wide, and often contreversial, range of subjects being discussed. From the fundamental philosophies of both the festival organiser, and goer. To the influence of psychoactive substances on music culture, art and wider society. I massively enjoyed the interactive discussions that derived some phenomenal and heart-warming perspectives  from some of the most influential artists, performers and event organisers in modern transformational festival culture. It was great to see this form of interaction being represented at Boom, and even more so that it was far more organised than anything of the like that I have experienced at other events.

4. How important do you think the educational/skill sharing aspect of the event is?
For me it was incredible to witness such a unique convergence of educational and liesurable activities. The commitment to education being integral to the festivals raison d'etre, is valiant and awe insiring. At all times there was something magical taking place in a context outside of what mainstream society might consider valuable. The opportunity to engage with activities and subjects such as meditation and psychedelic drugs, that are often brushed under the carpet by more conventional paradigms, is a highlight of Booms alternative attractions and of unimaginable benefit to both the participant and wider society. The promotion of vivacious discussion on topics unperscribed by the narratives of capitalist society is essential in a time when freedom of speech is being diminished within mainstream media, and alternative perspectives on how we can lead our lives are being met with increasing hostility by those who are attempting to clutch the straws of a dying paradigm that promotes mindless consumerism and the waste of resources for personal profit, over fair distribution and sustainable resource management, and is an invaluable weapon for exsposing and resolving the injustices and fallacies of the capitalist world.

5. What did you learn or gain from attending Boom Festival and will this influence you outside of the festival environment? (if you did learn something please explain)
For myself, the festival was more an opportunity to ground, consolidate and expand upon some of my own pre-existing ideologies and philosophies about life the universe... and everything, that in mainstream society are considered peculiar and sometimes ridiculed, but at places such as Boom are on the tip of everyone’s tongues and are openly and respectfully discussed. Helping me to reaffirm my own assurances, and interact with people of similar persuations. In a similar way to a heroic psychedelic experience, the experience of Boom is not one of unearthing some ancient universal secret, but more of unveiling, accepting, rejoicing and catalysing the fundamental understanding and appreciation of life and the universes nature of oneness, harmony, creation and sharing. The awareness of these truths exists already within our own conscious perception, and events like Boom, in the same way as psychedelics, are helping those who indulge to uncover, resonate with, embrace, embody and expand upon their perception of this existential fundamental, and its benefits to the evolution of consciousness and human society, whilst other external forces seek to have them ignore it.

6. What do you see in the future for events like Boom Festival? (growth points, festival evolution ect)


I see only big wonderful things, in bright and beautiful places, with inspirational and loveable people for anything offering even a remotely similar deliverance of the principles demonstrated at Boom. For me I envisage a transition from these events being on the edge of societal culture to a point where they are merged seamlessly, sustainably and unstoppably into the traditional way of life. Where festivals run year round, blending the holistic pleasures with the more undesirable aspects of sustainable living into a package marketed in a manner that makes the old paradigm of mindless consumerism seem unpalatable and redundant to even the most stubborn and catacombed mind. Transformational Festivals are Spartacus.
Posted by Jordan Harrison-Reader at 16:08

Email ThisBlogThis!Share to TwitterShare to FacebookShare to Pinterest
Labels: OUGD601